The Foundation Trust is pleased to be entering its second season in partnership with the Greater Boston Stage Company (GBSC) on the Giving Voice: Foundation Trust Drama Series. This five-year series sponsored by the Foundation Trust aims to elevate traditionally underrepresented communities within the theater industry. These communities include, but are not limited to, women, people of color, members of the LGBTQ+ community, and people with disabilities.

The Foundation Trust has been working closely with the Greater Boston Stage Company to shape the Giving Voice series, featuring plays written within the last 50 years or contemporary adaptations of classic works. Launched in 2019, this initiative is part of the Foundation Trust’s priority track dedicated to the preservation of New England’s cultural and environmental heritage, but also addresses populations and topics covered by the Foundation Trust’s primary focus of overcoming trauma. 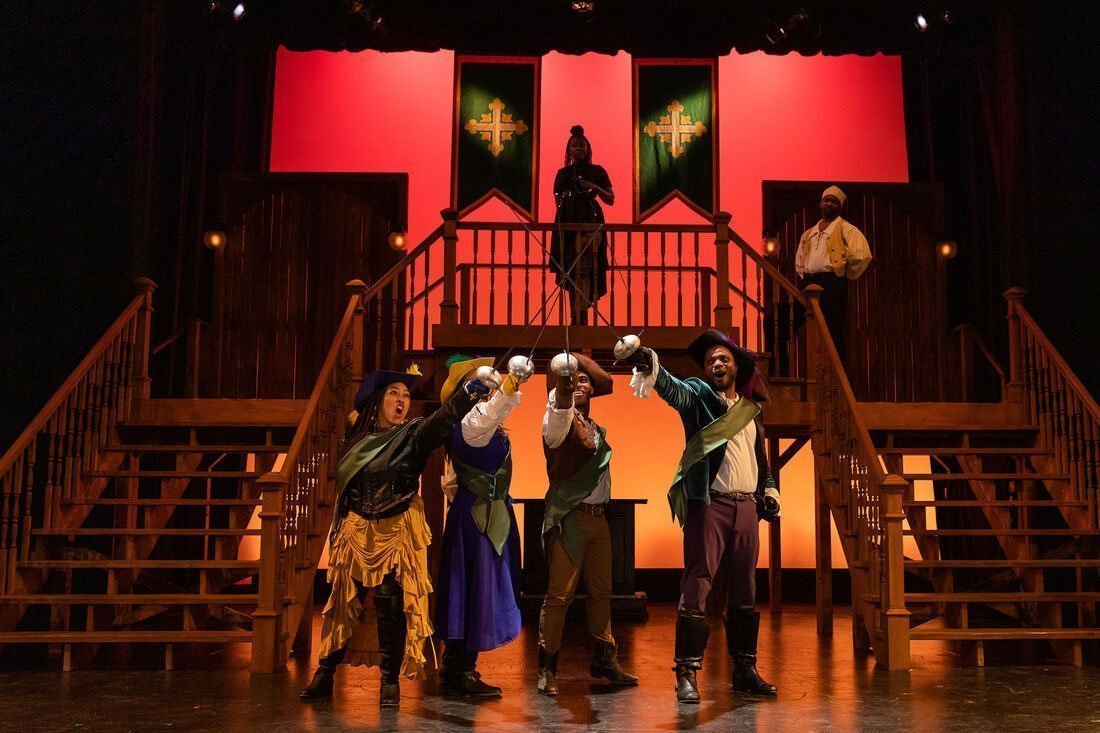 Maurice Parent, Executive Director of the Front Porch Arts Collective and one of the actors in The Three Musketeers praised the Giving Voice series and its synchrony with the on- and off-stage objectives of the two-year-old Front Porch Arts Collective. “Ethnically-specific theater companies don’t often get a seat at the table, so we are grateful to the Greater Boston Stage Company and Giving Voice,” he said, further noting the importance to “be deliberate about the types of shows we produce and audiences we cultivate. We want to make space for people who traditionally are not coming to the theater in large numbers. People who resemble the narratives on stage should be in the audience and those who are not part of that culture will benefit as well. It is important to make it a dialogue and expose people to different perspectives.”

A unique element of every Giving Voice production will be a High School Night sponsored by the Foundation Trust during which area theatre students are invited to attend the show for free accompanied by their parents or teachers and participate in a post-show Talkback with the cast.

Executive Director of the Foundation Trust, Joseph Spinazzola observed the impact of the students’ presence during the first production in the Giving Voice series.

“The energy the students brought to the Three Musketeers was electrifying. Their excitement was contagious. Their keen attention and uproarious response to the many forms of humor in this play— dramatic gesticulations, cutting repartee, anachronistic references to contemporary social issues—invigorated the season ticket holders sitting in their midst. After the play, both production staff and actors alike marveled at how the mere presence of a couple dozen high school theater students interspersed throughout the audience transformed the performance, galvanizing the cast and inspiring them to heights that easily surpassed those of their opening the night prior.”

Making these works accessible to a broader audience not only elevates new perspectives into the mainstream, it can impact social norms and enrich broader culture. By featuring relevant, timely content, the live theater featured in the Giving Voice series not only entertains, it can also be an eye-opening shared experience addressing many of the social, cultural, and racial issues facing society today.

“through Giving Voice, we are succeeding in exposing audiences to playwrights and plays they otherwise may not be exposed to. With the plays featured in Giving Voice, there is something for everyone, and people who previously didn’t identify with live theater offerings may suddenly see themselves represented in the content or characters on stage. When this happens, it can empower a new generation of artists to share their perspectives with us. The Foundation Trust is proud to be part of this effort to increase inclusivity in the theater as well as in the greater community.”

After the first year of the partnership, the Giving Voice series continues to expand opportunities for audiences, the theater, and the artistic talent. Amy Morin, Managing Director at the Greater Boston Stage Company explains that

“it has always been a part of our mission to present new works and unique takes on familiar works, but it can be challenging as new works are not as commercially viable as more well-known plays or musicals. When we partnered with the Foundation Trust, it was like a huge weight was lifted, because for at least five seasons, we have support for this important part of our mission. The long-range nature of the gift allows us to plan further out. In conversations with staff, it has allowed us more breathing space to discuss the work we’re doing – why here and why now - and select titles that we might otherwise not have been able to produce. Additionally, public reaction to Giving Voice has been enthusiastic. People appreciate the opportunity to see new work, and having support from theater-goers like our friends at The Foundation Trust has been a vote of confidence that what we’re doing is right.”

In upcoming seasons, Giving Voice will continue to champion boundary-pushing plays and playwrights. In Season 20, the Giving Voice production will be The Moors, playing at the Greater Boston Stage Company March 12-29 (https://www.greaterbostonstage.org/moors.html). As Amy Morin notes, “The piece next year is very different. Audiences are really in for a treat!”

Posted in Announcements, Track 4: Inclusivity in the Arts
← Award Archive 2019Foundation Trust in the News – Summer 2019 →